In the steppes of Sápmi 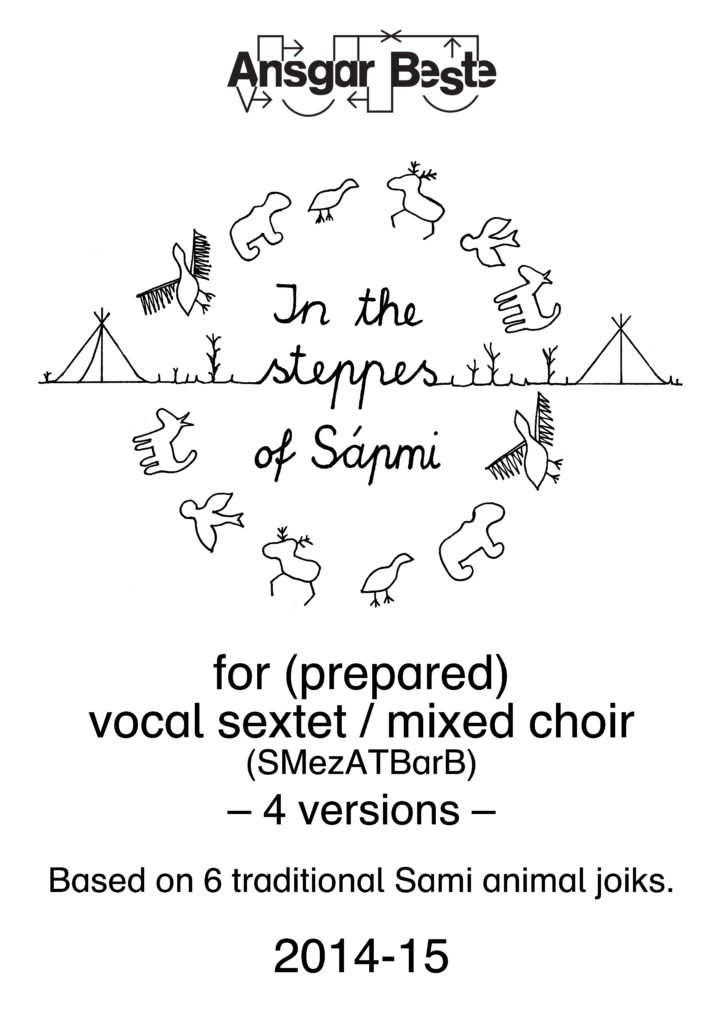 Sápmi is the Sami word for Lapland, the cultural region in Northern Europe (Norway, Sweden, Finland, Russia) which has traditionally been inhabited by the Sami people. The largest part of Sápmi lies north of the Arctic Circle, resulting in a subarctic climate, a sparse vegetation and a steppe-like landscape. Only few animals can survive in this wasteland: reindeer, wolf, bear and different birds.
Sami people have their own traditional folk songs, the joiks: short melodies, performed soloistically without coherent lyrics, with only few words or phonetic syllables and with a noise-like chesty vocalization. Joik melodies are usually repeated many times during the recitation with a gradual rise in tempo and tonality towards the end.
Most of the joik melodies represent famous people from the past, but some represent animals of the region. These animal joiks imitate the characteristics of the animals’ sounds and movements: The vocal technique of the growl voice, for example, is supposed to simulate both the wing-beats of a northern hawk owl (movement) and the cawing of a crow, the roaring of a bear or the growling of a wolf right before attacking its prey (sound). Also the particular intervallic-rhythmic shape of a melody can in some cases imitate the movement (e.g. the waddling, hopping and stumbling over the fields of a crow) and in other cases the sound, in an onomatopoeic manner (e.g. the howling of a wolf or the birdcall of the long-tailed duck).

Traditionally, joiks were both sung at work (while herding reindeers, hunting or fishing) and at any kind of social event (esp. weddings and shamanic séances).
In these religious ceremonies, it has been reported that the shaman, while playing the magic drum, joiking and gesticulating, was trying at the same time to invoke helping spirits and to fall himself into a state of arousal, ecstasy, trance and deep unconsciousness. In this state, the soul was supposed to separate from the body, to follow the helping spirits on their journey to the realm of shadows and finally to receive divine inspiration and epiphany.
As the auxiliary spirits were believed to have animal forms, they were called by imitating animal voices. In order to support the shaman, especially when he was lying motionless on the ground, his assistant and the participants from the community constantly and ceaselessly joiked the same animals during the entire séance.
For these overall strenuous efforts it is presumed that a certain degree of loudness, distortion and monotony of the voice resp. of the chant have been necessary.

The main idea of this work is to reflect on the sparse steppe landscape of Sápmi and to create an atmospheric soundscape, by combining the timbre of extended and prepared vocal techniques with the timbre of joik vocalization and with animal sounds from 6 traditional Sami animal joiks, imitating the following 6 animals: long-tailed duck (S), crow (Mez), northern hawk owl (A), reindeer cow (T), wolf (Bar) and bear (B).
The musical and textual repetitiveness of the joik has been made to a compositional principle for the entire work, illustrating the monotonous, repetitive scenery of the steppes.
The overall formal dramaturgy of the piece, continuously and polyphonically heading for one final climax, can on the one hand be perceived as the successive gathering and incitement of a group of animals, resulting in a wild, roaring animal orchestra.
On the other hand, the whole process can be interpreted simply as one single, elongated and polyphonic joik performance, or as an allusion to a shamanic séance, with the magic drum represented by vocal percussion and with the ritual ecstasy and epiphany in the very end.

The work consists of 6 parts:
Part 1 (b. 1-40) is a shorter inversion of the last part and serves as an anticipated climax.
Parts 2-4 (b. 41-639) and part 5 (b. 640-746) are gradually building up the 6 joik melodies from small fragments, until they finally appear in complete versions (e.g. in bars 635-639 and 742-746 as a dense canon).
In parts 2-4, these isolated animal sounds join together with extended vocal techniques and elements of vocal percussion, i.e. with the imitation of the drum-set and popular-music rhythms through human vocal articulation. A systematic, pre-compositional elaboration, differentiation and sound-typological structuring of the so-called extended vocal techniques has been undertaken in advance to allow for one elongated and smooth 15-minute timbre transformation from air sound via several intermediate stages to sung pitch.
In part 5, the pure joik cells (excluding vocal percussion) form an increasingly complex dialogue, resulting in a continuous density crescendo, thus preparing for the final part.
Part 6 (b. 747-829) is composed as one complex polyphonic joik using 3 traditional joik methods for increasing tension towards the culmination in the end:
– gradual (microtonal) transposition of the joik melodies upwards.
– gradual accelerando by shortened single notes.
– gradual accelerando by accelerated metre.