← Selection by the Ensemble Aleph (Fra) 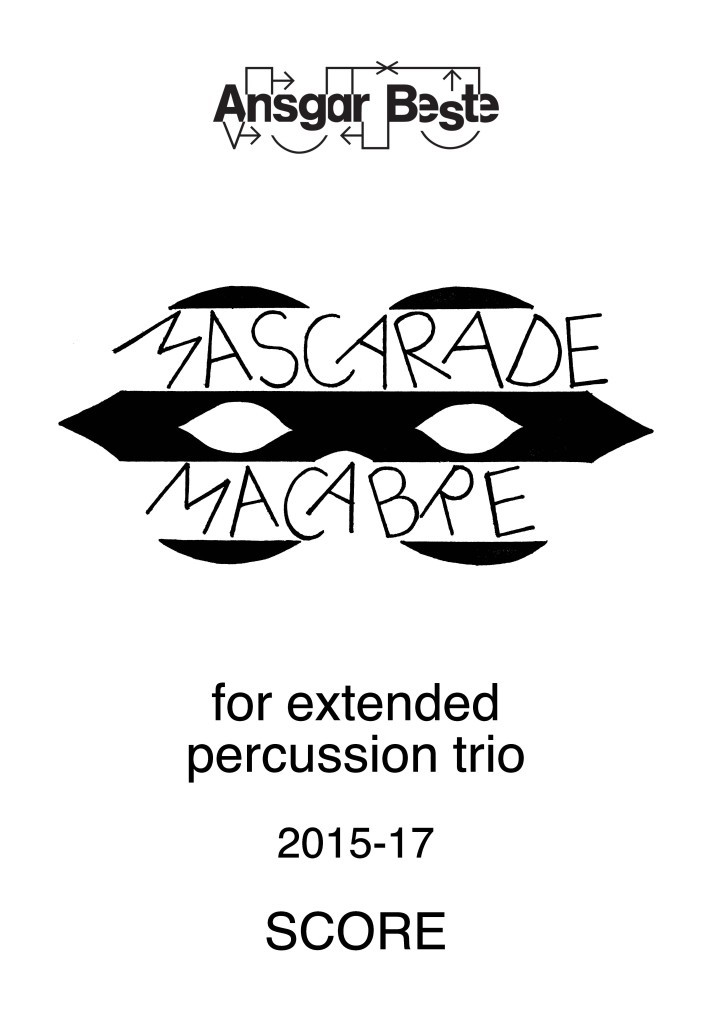 The work Mascarade Macabre was first of all inspired by a courtly masquerade resp. by a traditional masked ball in former centuries. Old and more recent dance rhythms of popular music are generated by different standard and non-standard percussion instruments.
The dance rhythms appear in diverse variations: treatments like augmentation/diminution, permutation and modulation result in a rhythmic texture with varying degrees of density, partly through polyphonic superpositions. This rhythmic framework gives rise to a musical form consisting of three more animated and two contrasting calmer sections (A B A’ C A”).

The macabre nature of this masquerade is derived from the late-medieval allegory of the Danse Macabre, which has fascinated and inspired artists of all genres until today. In these Dances of Death, death is often symbolically represented (in words or images) by one or several dancing skeletons. In early examples, these skeletons usually perform a round dance together with living beings in the moment of their death. In more recent times, resurrected skeletons tend to perform an infernal dance in a graveyard at midnight.

On paintings, frescoes and woodcuts of the Late Middle Ages and Early Renaissance, the depicted skeletons frequently play musical instruments, mainly drums and wind instruments, the dance instruments of that time, being condemned by the Church as inharmonious and devil’s work (in contrast to the harmonious and positive string instruments).
While transferring this historical instrumental setting to a contemporary piece for percussion trio, the sounds from the wind instruments, on the one hand, have been substituted by continuous but unstable (inharmonious) sounds from cuíca, spring drum, bowed flexatone and some unusual sound objects extending the percussion apparatus. These sounds have the function of creating the atmospheric background of the scenery, especially in the two calmer sections of the piece.
The percussive attacks of the drums, on the other hand, are supposed to generate the imaginary sound world of the protagonists, the dancing skeletons, as described in the poem Der Totentanz (Dance of Death, 1813) by Johann Wolfgang Goethe (1749-1832): the waggling and wriggling of the bones, producing rattling and clattering sounds, as if dictating the beat of the dance. Dry percussion instruments (musical spoons, guiro, for­est devil, templeblocks), bowed fluted sticks as well as shaken flexatones are taking responsibility for this tone-painting task.

Finally, the overall connection of permanently ongoing dance rhythms with a rather peculiar combination of instruments and sounds, is intended to illustrate the absolute perversion of the dance as a genuine expression of the human play instinct and enjoyment of life. This conception of the dance is perverted through the fact that the death as a synonym for the cold and frozen, for the absolute end of (the enjoyment of) life actually is dancing. Such a grotesque parody of the dance can consequently be regarded as a macabre derision and mockery of the human beings themselves, short-sightedly trapped in worldly pleasures.

At the same time, the sound world and structure of this piece can be interpreted as an ironic commentary on the numerous macabre masquerades occurring in everyday and real life today: e.g. the playful disguise of children or adults with the uniforms of soldiers, with the costumes of science-fiction warriors and zombies or with nuclear gas masks; the criminal disguise as a living yet actually already dead rich person due to inheritance issues; or, not least, the sudden political disguise of a former guard of tyranny as a guard of democracy in a post-dictatorship society.