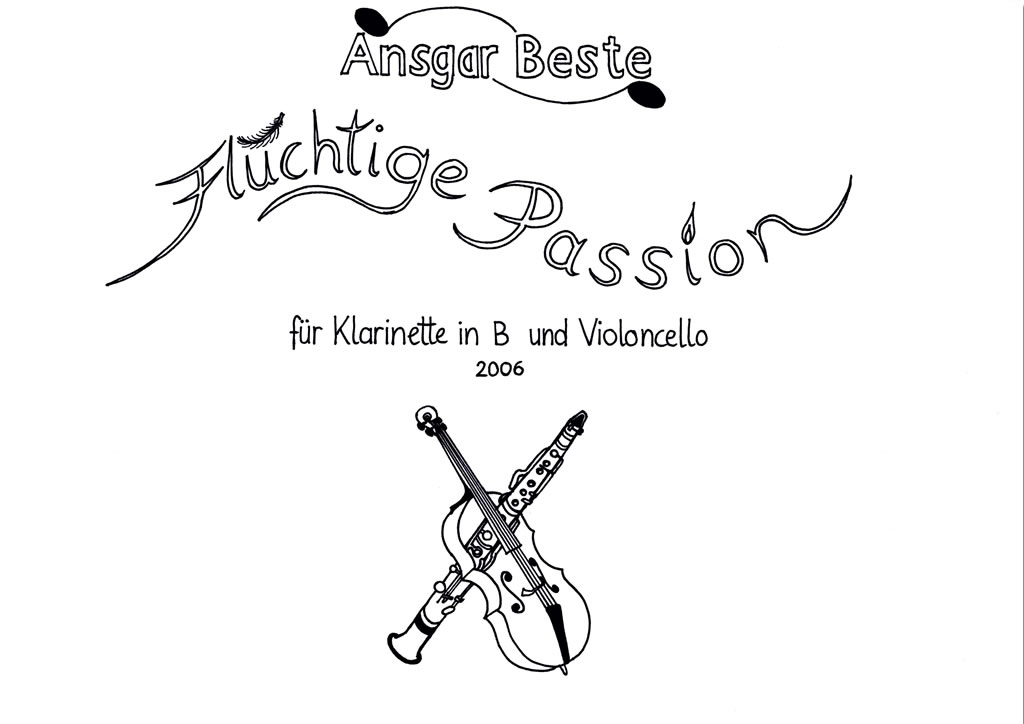 The “Fleeting passion” for clarinet in B and cello wants to obtain an emotional impact with the means of New Music as well as with a strict and complex construction: whilst longing emotions escalate from an empty absur­dity to an eruption in the first part, a mental ap­pease­ment leads to satisfied calmness in the second part.

Cello (part I) and clarinet (part II) act alternately as leading voice each with 3 stylistic devices for the de­sign: monody, fla­geo­let glissando and trills in the cello, melody in two voices, tremolo ritardando and multi­pho­nic in the clarinet. For the multi­phonics as transparent sounds as possible were chosen (regard­ing the inter­vals) and composed with the criteria of increasing clarity.
The tone pitch progress was generated with the help of polynomials. Part I begins in the extreme depth, the se­con­dary voice (cl.) pushes the leading voice (vc.) up to an insistent mergence on the climax of “f sharp3” in the end. In parallel to this even the 3 stylistic devices of the cello internally attain a mergence.

The passion is intensified by a distinct shortening of the pauses and the monodic parts simultaneously to an augmentation of the lamenting flageolet glissando.
Part II starts with the top note “f sharp3“, the secondary voice (now vc.) pushes the leading voice (cl.) again, down to the low­est register. But here the stylistic devi­ces don’t begin in mergence, but unmask immediately the fragility of blind passion.
By the sound strategy and the shortening of the multi­phonics as well as by the augmentation of the pauses and melodic parts the tranquilisation is amplified.
Altogether the cello represents the heart and the clar­inet the motor which pushes the heart at first but calms down just very slowly after the emotional eruption.

The dynamic development proceeds according to the tone pitch progress from “ppp” to “fff” und back again. The overall high per­centage of extremely quiet dyna­mics grants the passion its fleeting character.
As tone material for the secondary voices as well as for the monody and the melody in two voices of the lead­ing voices an all-interval serial was chosen which be­gins with a small second, a small sixth and a small seventh and thereby expresses the long­ing prevailing mood. In both parts the serial develops out of a single tone and disappears there again.
The other elements range quasi-chromatically on the ed­ge of the tone pitch framework. The flageolet glis­san­di proceed according to their own systematics, al­ways with “f sharp” as a central tone.
For the sound strategy the (traditional and new) playing techniques were set in such a way that part I develops from noisy sounds to particularly intensively sounding tone pitches and part II in the opposite direction. Only the “pression” of the cello at the beginning of part II as a brutal forerunner of the collapse forms an exception. The cello sounds rich in harmonics in the end create a transfigured final impact.

Rhythmically the secondary voices conform with a complex matrix and even the main voices follow strict legalities. In every voice the motional density reaches its climax by achieving the top respectively the lowest pitch. Here even the length of the subsections is shortest and the all-interval serial most complete. In the following constriction of the tone pitch space the inte­rior tension is enhanced by a motional decrease, by a prolongation of the subsections as well as by a tonal reduction of the all-interval serial.

The form operates with the proportions of the golden section on different levels: both between the parts I and II and within them.